After launching the Galaxy M10 and Galaxy M20 smartphones late last month, Samsung is all set to unveil one more Galaxy M series smartphone of its new entry-level series. The company confirmed that the Galaxy M30 is coming next week and its debut market will be the same as the other two - India.

Samsung hasn't shared any hardware details of the Galaxy M30, except that it will feature a 6.4-inch Super AMOLED Full-HD+ Infinity U Display. Still, the company gave us an image of the Galaxy M30 which reveals the waterdrop-shaped notch on the front and triple cameras on the back next to an elliptical fingerprint scanner.

This means we have to rely on leaks for further information and those tell us that the phone will pack an Exynos 7904 SoC with 4GB/6GB RAM and 64GB/128GB internal storage. The Galaxy M30 will pack a 5,000 mAh battery, a 13MP and two 5MP cameras at the back, and a 16MP snapper on the front.

The Galaxy M30 will be launched in India on February 27 at 6 pm local time. It will be sold exclusively through Amazon. Chances are it will then be released in other markets, but we are yet to hear specifics on those. 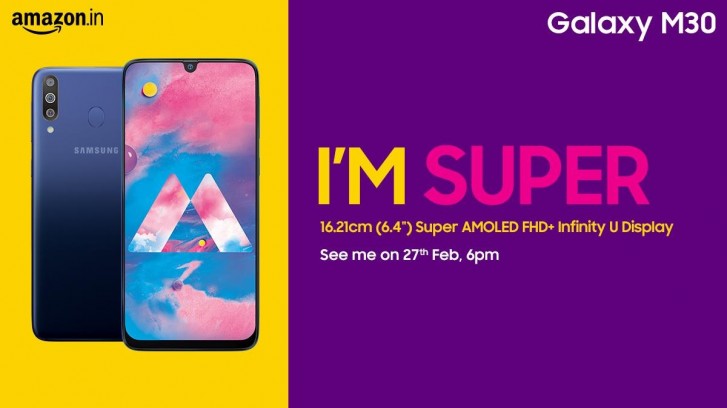